On the 20th (Sun), see the interesting displays at Tales from Iceland, don't miss a visit to Laugavegur, admire the masterpieces at Einar Jonsson Museum (Listasafn Einars Jonssonar), get to know the fascinating history of Reykjavik Open Air Museum, then head off the coast to Videy Island, and finally visit a coastal fixture at Grotta Lighthouse.

For maps, photos, ratings, and other tourist information, refer to the Reykjavik online journey planner.

Newark, USA to Reykjavik is an approximately 9.5- hour combination of flight and shuttle. You can also do a combination of train, flight, and shuttle; or do a combination of bus, flight, and shuttle. The time zone changes from Eastern Standard Time to Greenwich Mean Time, which is usually a 5 hour difference. When traveling from Newark in October, plan for cooler days and little chillier nights in Reykjavik: temperatures range from 46°F by day to 37°F at night. Cap off your sightseeing on the 20th (Sun) early enough to go by car to Skogar.
more less

Take a trip to Skogar for a chance to see a picture-perfect glacier and a collection of waterfalls fed by the Skoga River.

On the 21st (Mon), explore the ancient world of Rutshellir Cave, enjoy the sand and surf at Reynisfjara Beach, contemplate in the serene atmosphere at Reyniskyrka Church, then admire all the interesting features of Dyrhólaey, and finally explore the striking landscape at Sólheimajökulll.

For more things to do, ratings, where to stay, and other tourist information, you can read our Skogar road trip planning tool.

Traveling by car from Reykjavik to Skogar takes 2.5 hours. Alternatively, you can take a bus. Expect a daytime high around 45°F in October, and nighttime lows around 41°F. Cap off your sightseeing on the 21st (Mon) early enough to travel to Akureyri.
more less

Things to do in Skogar

Vik
Find places to stay Oct 20 — 21:
Hotels on TripAdvisor
Homes on Airbnb
Highlights from your plan 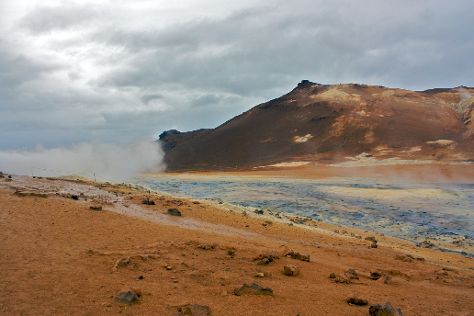 On the 22nd (Tue), take in the dramatic scenery at Goðafoss Waterfall and then take in the awesome beauty at Mt. Namafjall (Namaskard). On your second day here, admire the sheer force of Hverfjall, take in the dramatic natural features at Hverir, then stroll through Krafla Lava Fields, and finally go for a walk through Viti Crater.

For where to stay, reviews, and more tourist information, read our Akureyri trip planner.

Traveling by combination of bus and flight from Skogar to Akureyri takes 6 hours. Alternatively, you can drive; or take a bus. Plan for a bit cooler nights when traveling from Skogar in October since evenings lows in Akureyri dip to 33°F. On the 24th (Thu), you'll have the morning to explore before heading back home.
more less