Situated between the Neris and Nemunas rivers, Kaunas is known for its old town, which, though smaller than the capital's, is in much better condition.

Kaunas Castle has been added to your itinerary. On the 19th (Mon), step into the grandiose world of Kaunas Castle and then take a stroll through Old Town Kaunas.

Riga, Latvia to Kaunas is an approximately 4-hour car ride. You can also take a bus; or fly. In July, daytime highs in Kaunas are 27°C, while nighttime lows are 15°C. You'll set off for Warsaw on the 20th (Tue).
more less

Things to do in Kaunas

Your day by day itinerary now includes Copernicus Science Centre as well as Zamek Krolewski w Warszawie - Muzeum. Start off your visit on the 20th (Tue): appreciate the extensive heritage of Old Town.

Traveling by flight from Kaunas to Warsaw takes 5 hours. Alternatively, you can drive; or take a bus. The time zone changes from Eastern European Standard Time to Central European Standard Time, which is usually a -1 hour difference. Expect a daytime high around 29°C in July, and nighttime lows around 17°C. Finish your sightseeing early on the 21st (Wed) so you can take a train to Katowice.
more less

Things to do in Warsaw

©
Katowice is a city in southwestern Poland, with a population of 299,910 and the center of the Silesian Metropolis, with a population of 2.2 million.Throughout the mid-18th century, Katowice had developed into a village upon the discovery of rich coal reserves in the area. Your day by day itinerary now includes Jasna Gora as well as Panstwowe Muzeum Auschwitz-Birkenau. On the 22nd (Thu), get engrossed in the history at Panstwowe Muzeum Auschwitz-Birkenau, see the interesting displays at Tattoo Museum, then enjoy breathtaking views from Warszawa II Observation Tower, and finally contemplate in the serene atmosphere at Jasna Gora.

To see maps, more things to do, other places to visit, and more tourist information, use the Katowice trip itinerary builder app.

Traveling by train from Warsaw to Katowice takes 3 hours. Alternatively, you can drive; or fly. Expect a daytime high around 29°C in July, and nighttime lows around 15°C. Finish up your sightseeing early on the 23rd (Fri) so you can travel to Vienna.
more less

Things to do in Katowice

The cultural, economic, and political center of the country, Vienna has developed from its early Celtic and Roman roots into a medieval and Baroque city, with an old town that was designated a World Heritage Site in 2001.

Prater has been added to your itinerary. There's lots more to do: step into the grandiose world of Schonbrunn Palace, meet the residents at Schönbrunn Zoo, see the interesting displays at The Hofburg, and explore the world behind art at Belvedere Palace.

To see maps, where to stay, traveler tips, and more tourist information, use the Vienna day trip planning website.

Getting from Katowice to Vienna by car takes about 4.5 hours. In July, daytime highs in Vienna are 32°C, while nighttime lows are 19°C. You'll have a few hours on the 26th (Mon) to wrap things up before traveling to Ljubljana.
more less

Things to do in Vienna 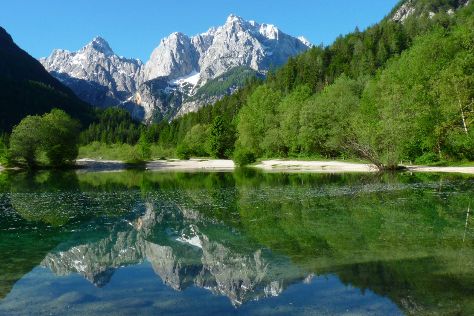 Sitting astride the Ljubljanica River, Ljubljana is marked with picturesque bridges and a marketplace, designed by the famous architect Jože Plečnik.

Your day by day itinerary now includes Vintgar Gorge, Ljubljana Castle and Ljubljana Old Town. You'll find plenty of places to visit near Ljubljana: Vino Zorz (in Slap), Bled (Bled Island, Zakladi Slovenije, &more) and Postojna (Predjama Castle & Postojna Cave). Next up on the itinerary: contemplate the waterfront views at Ljubljanica River and take in the views from Triple Bridge.

To see traveler tips, more things to do, where to stay, and tourist information, refer to the Ljubljana online travel planner.

You can drive from Vienna to Ljubljana in 4 hours. Alternatively, you can do a combination of flight and shuttle; or take a shuttle. July in Ljubljana sees daily highs of 32°C and lows of 17°C at night. Finish your sightseeing early on the 30th (Fri) so you can drive to Rijeka.
more less

Things to do in Ljubljana 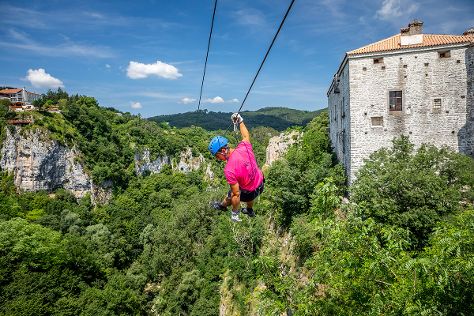 ©
Rijeka is the principal seaport and the third-largest city in Croatia (after Zagreb and Split). Your day by day itinerary now includes Zip Line Pazinska jama, Volosko and Trsat Castle. Kick off your visit on the 31st (Sat): kick your exploration up a notch at Zip Line Pazinska jama, then wander the streets of Volosko, and then explore the historical opulence of Trsat Castle.

For other places to visit, where to stay, and more tourist information, refer to the Rijeka online route planner.

Traveling by car from Ljubljana to Rijeka takes 1.5 hours. Alternatively, you can take a bus; or take a train. Traveling from Ljubljana in July, plan for somewhat warmer nights in Rijeka, with lows around 25°C. Cap off your sightseeing on the 31st (Sat) early enough to go by car to Krk Island.
more less

Things to do in Rijeka 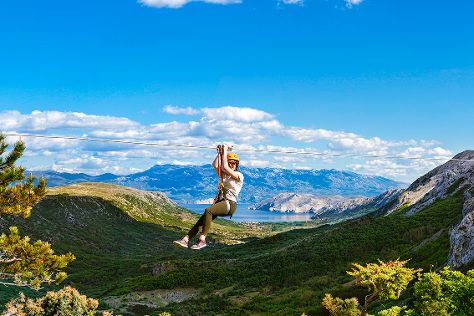 A trip to Krk Island ensures you enjoy some Italian atmosphere and loads of Croatian culture.

Krk Island is known for historic sites, beaches, and adventure. Your plan includes some of its best attractions: kick your exploration up a notch at Zipline Edison, explore the activities along Oprna Bay, find something for the whole family at Underwater park Punat, and appreciate the history behind Baska Tablet.

Traveling by car from Rijeka to Krk Island takes an hour. Alternatively, you can take a bus. In July, plan for daily highs up to 35°C, and evening lows to 25°C. Finish your sightseeing early on the 3rd (Tue) so you can drive to Zagreb.
more less

Things to do in Krk Island 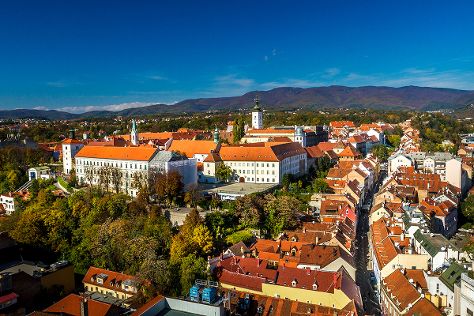 Zagreb boasts a combination of Austro-Hungarian and Socialist architecture, but it is beloved for its outdoor cafe culture.

For reviews, other places to visit, ratings, and other tourist information, go to the Zagreb trip builder tool.

Drive from Krk Island to Zagreb in 2.5 hours. Alternatively, you can take a bus; or do a combination of taxi and train. Prepare for little chillier weather when traveling from Krk Island in August: high temperatures in Zagreb hover around 32°C and lows are around 17°C. Finish your sightseeing early on the 4th (Wed) so you can drive to Budapest.
more less

Things to do in Zagreb

Pearl of the Danube

You might consider the city of Budapest, divided by the Danube River into two distinctive cities--Buda and Pest--to be essentially one large World Heritage Site.

Your day by day itinerary now includes Budapest Zoo & Botanical Garden as well as Buda Castle. There's lots more to do: admire the landmark architecture of Hungarian Parliament Building, contemplate the long history of Shoes on the Danube Bank, boost your wellbeing at a local thermal spa, and make a trip to Szabadsag Square.

For where to stay, photos, more things to do, and other tourist information, go to the Budapest online trip maker.

Getting from Zagreb to Budapest by car takes about 3.5 hours. Other options: take a shuttle; or take a bus. August in Budapest sees daily highs of 32°C and lows of 18°C at night. Wrap up your sightseeing on the 7th (Sat) to allow time to travel to Krakow.
more less

Things to do in Budapest

One of Poland's oldest cities, Krakow sits at the foot of the Carpathian Mountains, its historical town center nestled on the left bank of the Vistula River.

Your day by day itinerary now includes Kosciuszko's Mound (Kopiec Kosciuszki). There's lots more to do: steep yourself in history at Wawel Cathedral, appreciate the extensive heritage of Wawel Royal Castle, make a trip to Krakow's Rynek Glowny Central Square, and explore the galleries of Wieliczka Salt Mine.

For more things to do, ratings, other places to visit, and more tourist information, refer to the Krakow holiday website.

You can fly from Budapest to Krakow in 5 hours. Alternatively, you can drive; or take a bus. Expect a bit cooler temperatures when traveling from Budapest in August; daily highs in Krakow reach 29°C and lows reach 15°C. Wrap up your sightseeing by early afternoon on the 10th (Tue) to allow time for travel to Vilnius.
more less

Things to do in Krakow

Wieliczka Salt Mine
Find places to stay Aug 7 — 10:
Hotels on TripAdvisor
Homes on Airbnb
Highlights from your plan 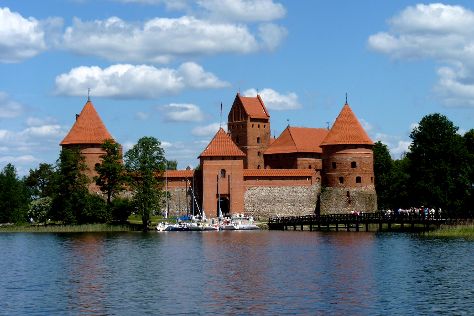 The capital of Lithuania, Vilnius, boasts an impressive medieval quarter--one of the continent's largest and a World Heritage Site with almost 2,000 historical buildings.

Your day by day itinerary now includes National Museum of Lithuania as well as Palace of the Grand Dukes of Lithuania. Change things up with these side-trips from Vilnius: Trakai (Trakai Island Castle Museum & Kenesa). And it doesn't end there: take an in-depth tour of Gediminas Castle Tower, take in the awesome beauty at Hill of Three Crosses, take a stroll through Uzupis, and take in the spiritual surroundings of Gate of Dawn.

Make your Vilnius itinerary with Inspirock to find out what to see and where to go.

You can fly from Krakow to Vilnius in 6 hours. Other options are to drive; or take a train. Traveling from Krakow to Vilnius, you'll lose 1 hour due to the time zone difference. August in Vilnius sees daily highs of 27°C and lows of 14°C at night. Wrap up your sightseeing on the 13th (Fri) early enough to drive back home.
more less

Things to do in Vilnius

Trakai
Find places to stay Aug 10 — 13:
Hotels on TripAdvisor
Homes on Airbnb
Highlights from your plan