Akureyri is known for nature, parks, and adventure. Your plan includes some of its best attractions: take in the dramatic scenery at Goðafoss Waterfall, play a few rounds at Akureyri Golf Club, step off the mainland to explore Knarrarberg - Yoga & Spa, and stop by Flora, Akureyri. 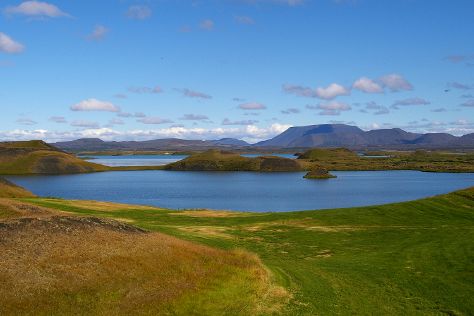 Explore the numerous day-trip ideas around Reykjahlid: Husavik (Horseback Riding Tours, Husavikurkirkja, &more). Next up on the itinerary: take in the dramatic scenery at Dettifoss Waterfall, take in the dramatic natural features at Askja, take in the pleasant sights at Viti Crater, and contemplate the waterfront views at Lake Myvatn.

For where to stay, ratings, other places to visit, and tourist information, read Reykjahlid trip planning app.

Getting from Akureyri to Reykjahlid by car takes about 1.5 hours. Other options: take a bus. In May, daytime highs in Reykjahlid are 49°F, while nighttime lows are 37°F. Finish your sightseeing early on the 22nd (Sat) so you can drive to Varmahlid.
more less

Lake Myvatn, Husavik
Find places to stay May 16 — 22:
Hotels on TripAdvisor
Homes on Airbnb
Highlights from your plan

Traveling by car from Reykjahlid to Varmahlid takes 2.5 hours. Alternatively, you can take a bus; or take a bus. In May, daytime highs in Varmahlid are 49°F, while nighttime lows are 37°F. Finish up your sightseeing early on the 26th (Wed) so you can go by car to Siglufjordur.
more less

Things to do in Varmahlid

Hvammstangi, Blonduos, Saudarkrokur
Find places to stay May 22 — 26:
Hotels on TripAdvisor
Homes on Airbnb
Highlights from your plan

©
Take a break from Siglufjordur with a short trip to Drangey Island in Saudarkrokur, about 58 minutes away.

To see traveler tips, more things to do, other places to visit, and other tourist information, read our Siglufjordur trip itinerary maker website.

Getting from Varmahlid to Siglufjordur by car takes about 1.5 hours. In May, daily temperatures in Siglufjordur can reach 49°F, while at night they dip to 37°F. On the 29th (Sat), you're off to Madrid.
more less

Things to do in Siglufjordur

Drangey Island
Find places to stay May 26 — 29:
Hotels on TripAdvisor
Homes on Airbnb
Highlights from your plan

Madrid is known for its cultural and artistic heritage, lively nightlife, and a dynamic culinary scene.

Kick off your visit on the 31st (Mon): contemplate the long history of Royal Palace of Madrid, browse the eclectic array of goods at Mercado San Miguel, and then admire the masterpieces at Prado National Museum. Here are some ideas for day two: examine the collection at Museo Nacional Thyssen-Bornemisza, don't miss a visit to Plaza Mayor, then make a trip to Puerta del Sol, and finally explore the world behind art at Museo Sorolla.

To find maps, where to stay, and other tourist information, go to the Madrid trip planning app.

Things to do in Madrid

Museums Historic Sites Shopping
Find places to stay May 30 — Jun 2:
Hotels on TripAdvisor
Homes on Airbnb
Highlights from your plan