Venture out of the city with trips to Bergamo (Basilica di Santa Maria Maggiore & La Citta Alta). There's lots more to do: take in the spiritual surroundings of Duomo di Milano, admire the landmark architecture of Casa Barelli, step into the grandiose world of Castello Sforzesco, and don't miss a visit to Galleria Vittorio Emanuele II.

To see where to stay, maps, other places to visit, and other tourist information, read our Milan trip itinerary tool.

If you are flying in from Ireland, the closest major aiports are Malpensa International Airport, Milano Linate Airport and Il Caravaggio International Airport. In August, daily temperatures in Milan can reach 34°C, while at night they dip to 22°C. Wrap up your sightseeing on the 18th (Tue) early enough to drive to Colico.
more less

Bergamo
Find places to stay Aug 16 — 18:
Hotels on TripAdvisor
Homes on Airbnb
Highlights from your plan

©
Colico is a city in the province of Lecco, Lombardy, Italy. Start off your visit on the 19th (Wed): admire the natural beauty at Il Giardino Botanico - Hotel Villa Cipressi, admire the landmark architecture of Villa Monastero, take in the architecture and atmosphere at Chiesa di San Giorgio, explore the historical opulence of Castello di Vezio, then take in breathtaking views at Orrido di Bellano, and finally contemplate in the serene atmosphere at Chiesa dei Santi Nazaro e Celso. Get ready for a full day of sightseeing on the 20th (Thu): trek along Sentiero dei Forti, then get outside with KTS40CableCrew, then admire the sheer force of Cascate dell'Acqua Fraggia, and finally pause for some serene contemplation at Chiesa Santa Maria del Tiglio.

For other places to visit, more things to do, where to stay, and tourist information, use the Colico trip planning app.

Traveling by car from Milan to Colico takes 2 hours. When traveling from Milan in August, plan for slightly colder days in Colico, with highs around 31°C, while nights are about the same with lows around 20°C. Cap off your sightseeing on the 20th (Thu) early enough to go by car to Bellagio.
more less

Things to do in Colico 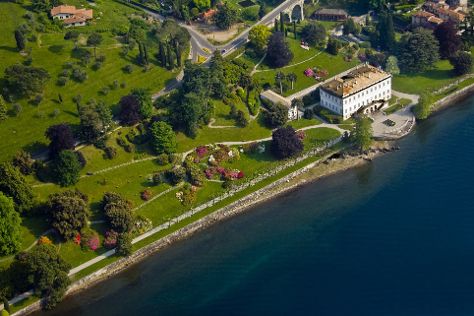 Known as the pearl of Lake Como for its luxury accommodations, high-end shops, and fine dining options, Bellagio serves as the lake's premiere resort town.

Kick off your visit on the 21st (Fri): take in nature's colorful creations at i Giardini di Villa Melzi, then admire the landmark architecture of Villa del Balbianello, then admire the natural beauty at Villa Carlotta, and finally stop by Elisa Palmieri. On your second day here, pause for some serene contemplation at Cathedral of Como (Duomo), take a tour by water with Boat Tours & Water Sports, and then don't miss a visit to Santuario Del Ghisallo.

Getting from Colico to Bellagio by car takes about 1.5 hours. In August, daytime highs in Bellagio are 33°C, while nighttime lows are 20°C. Cap off your sightseeing on the 22nd (Sat) early enough to go by car to Lazise.
more less

Things to do in Bellagio

©
Lazise is a comune (municipality) in the Province of Verona in the Italian region Veneto, located about 120km west of Venice and about 20km northwest of Verona. Step out of Lazise with an excursion to Castello Scaligero in Sirmione--about 38 minutes away. Next up on the itinerary: make a trip to Borghetto sul Mincio, make a splash at Caneva - The Aquapark, and get in on the family fun at Movieland Park.

To find reviews, more things to do, other places to visit, and other tourist information, refer to the Lazise trip planner.

Traveling by car from Bellagio to Lazise takes 2.5 hours. Alternatively, you can take a train; or take a bus. In August, daytime highs in Lazise are 35°C, while nighttime lows are 21°C. Wrap up your sightseeing by early afternoon on the 25th (Tue) to allow enough time to drive to Verona.
more less

Things to do in Lazise

City of Romeo and Juliet

Venture out of the city with trips to Mountbaldo (in Malcesine) and Mantua (Palazzo Te & Palazzo Ducale Mantova). There's much more to do: experience the emotional art of opera at Arena di Verona, make a trip to Piazza Bra, take in the views from Ponte Scaligero (Ponte di Castelvecchio), and pause for some serene contemplation at Basilica di San Zeno Maggiore.

To see ratings, traveler tips, other places to visit, and tourist information, you can read our Verona visit planner.

Verona is just a stone's throw from Lazise. Expect a daytime high around 35°C in August, and nighttime lows around 20°C. Wrap up your sightseeing on the 29th (Sat) to allow time to take a bus to Venice.
more less

Things to do in Verona

Kick off your visit on the 29th (Sat): wander the streets of Campo del Ghetto. On the next day, admire the striking features of Doge's Palace, contemplate the long history of Ponte dei Sospiri, then make a trip to Basilica di San Marco, and finally explore the activities along Canal Grande.

You can take a bus from Verona to Venice in 1.5 hours. Alternatively, you can drive; or take a shuttle. In August in Venice, expect temperatures between 34°C during the day and 22°C at night. On the 31st (Mon), wrap the sightseeing up by early afternoon so you can travel to Carpi.
more less

©
Carpi is an Italian town and comune of about 70,000 people in the province of Modena, Emilia-Romagna. Venture out of the city with trips to Lamborghini Museum (in Sant'Agata Bolognese), Brescello (Museo Brescello E Guareschi, Il Territorio E Cinema, Museo di Don Camillo e Peppone, &more) and Abbazia di Polirone (in San Benedetto Po). There's lots more to do: don't miss a visit to Palazzo Foresti, pause for some serene contemplation at Chiesa di San Bernardino da Siena, admire the landmark architecture of Basilica Cattedrale di Santa Maria Assunta, and get lost in a book at Biblioteca Multimediale Arturo Loria.

Before you visit Carpi, use our trip planner to discover what you can do and see there.

Traveling by car from Venice to Carpi takes 2.5 hours. In August in Carpi, expect temperatures between 36°C during the day and 22°C at night. Wrap up your sightseeing on the 3rd (Thu) early enough to travel to Florence.
more less

Things to do in Carpi

On the 4th (Fri), see the interesting displays at Pitti Palace, make a trip to Piazzale Michelangelo, take in the spiritual surroundings of Basilica della Santissima Annunziata - Chiesa di Santa Maria della Scala, admire the masterpieces at Academy Of Florence Art Gallery, then contemplate the long history of Basilica of Santa Croce, and finally don't miss a visit to L’importuno di Michelangelo. Here are some ideas for day two: don't miss a visit to Ratto della Sabina, get to know the fascinating history of Piazza della Signoria, take in the views from Ponte Vecchio, appreciate the extensive heritage of Piazza del Duomo, then contemplate in the serene atmosphere at Cathedral of Santa Maria del Fiore, and finally take in panoramic vistas at Campanile di Giotto.

For traveler tips, reviews, where to stay, and more tourist information, you can read our Florence trip planner.

You can drive from Carpi to Florence in 2 hours. In September, daytime highs in Florence are 30°C, while nighttime lows are 17°C. On the 6th (Sun), wrap the sightseeing up by early afternoon so you can take a train back home.
more less