©
Changde is a prefecture-level city in the northwest of Hunan province, People's Republic of China, with a population of 5,717,218 as of the 2010 census, of which 1,232,182 reside in the urban districts of Dingcheng and Wuling. On the 20th (Thu), contemplate in the serene atmosphere at Wuling Pavilion and then view the masterpieces at Changde Poem Wall. Get ready for a full day of sightseeing on the next day: contemplate the waterfront views at Liuye Lake Tourist Resort, thensee the interesting displays at Changde Museum, thenstroll around Changde Bin Lake Park, and finally take in the views from Changde Bridge.

Jerusalem, Israel to Changde is an approximately 22-hour combination of car and flight. You can also drive. Traveling from Jerusalem to Changde, you'll lose 6 hours due to the time zone difference. Finish your sightseeing early on the 21st (Fri) so you can travel to Shaoshan.
more less

Things to do in Changde

©
Shaoshan is a county-level city in Hunan Province, China. On the 22nd (Sat), make a trip to Mao Zedong Bronze Statue Square, make a trip to Mao's Ancestral House, take an in-depth tour of Shaoshan Mao Zedong Memorial Museum, thenpause for some photo ops at Bronze Statue of Chairman Mao, and finally steep yourself in history at Mao Zedong's Former Residence (Shao Shan). Here are some ideas for day two: get into the urban bustle at Huaminglou Tourist Area and then explore the fascinating underground world of Shaoshan Dishui Cavern.

To find reviews, more things to do, traveler tips, and other tourist information, refer to the Shaoshan trip planner.

Traveling by car from Changde to Shaoshan takes 3 hours. Finish up your sightseeing early on the 23rd (Sun) so you can go by car to Changsha.
more less

Things to do in Shaoshan

A good starting point for explorations of the province, Changsha stands as a modern city with 3,000 years of history behind it.

Kick off your visit on the 24th (Mon): pause for some photo ops at Kai Fu Temple, thenget your game on at Orange Island Park, thentake in the dramatic natural features at Xiaoti Cliff, and finally take in the awesome beauty at Mount Yuelu. Keep things going the next day: find something for the whole family at Changsha Window of the World.

For reviews, traveler tips, where to stay, and tourist information, refer to the Changsha online journey maker.

You can drive from Shaoshan to Changsha in 1.5 hours. Cap off your sightseeing on the 25th (Tue) early enough to go by car to Fenghuang County.
more less

Things to do in Changsha

©
Changsha Window of the World 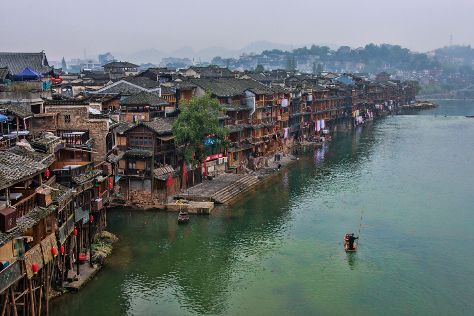 The main town of Fenghuang County boasts a rich history of more than 300 years, with well-preserved architecture and cultural traditions.

On the 26th (Wed), explore the activities along Xiangxi Shawan Scenic Resort, contemplate in the serene atmosphere at Zhunti Temple of Fenghuang Old City, take in the views from Phoenix Hong Bridge, thenexplore the ancient world of Phoenix Ancient Town, and finally get engrossed in the history at Fenghuang Ancient City Museum. Here are some ideas for day two: make a trip to Phoenix East Gate Scenic Area, see Miaojiang Great Wall, thendon't miss a visit to Huangsi Bridge Ancient City, thencontemplate the long history of Tuojiang Ancient Street, and finally get outside with Xiangxi Tianlong Valley Scenic Resort.

Drive from Changsha to Fenghuang County in 5 hours. Alternatively, you can do a combination of train and bus; or take a bus. Cap off your sightseeing on the 27th (Thu) early enough to go by car to Zhangjiajie.
more less

Things to do in Fenghuang County

The city of Zhangjiajie has become particularly well known for its striking surrounding landscape.

Spend the 28th (Fri) among lush scenery at Zhangjiajie National Forest Park. Spend the 30th (Sun) exploring nature at Tianmen Mountain National Forest Park. And it doesn't end there: don't miss a visit to Wulingyuan Scenic and Historic Interest Area of Zhangjiajie, take in panoramic vistas at Huangshizhai, have some family-friendly fun at Tujia Customs Park, and take in the views from Chapanta Scenic Resort.

To find where to stay, reviews, traveler tips, and tourist information, use the Zhangjiajie day trip tool.

Traveling by car from Fenghuang County to Zhangjiajie takes 3 hours. Alternatively, you can do a combination of taxi and train; or take a bus. Wrap up your sightseeing by early afternoon on the 1st (Mon) to allow enough time to travel back home.
more less

Things to do in Zhangjiajie