Use Inspirock's suggestions to plan your Sofia trip and find the best activities and attractions for your vacation.

Tel Aviv, Israel to Sofia is an approximately 6.5-hour flight. Plan for slightly colder nights when traveling from Tel Aviv in August since evenings lows in Sofia dip to °C. On the 11th (Sun), you'll travel to Plovdiv.
more less

On the 11th (Sun), make a trip to Clock Tower and then don't miss a visit to Hisar Kapia.

To find other places to visit, maps, more things to do, and tourist information, read our Plovdiv trip planner.

Traveling by car from Sofia to Plovdiv takes 1.5 hours. Alternatively, you can take a shuttle; or take a bus. In August, daytime highs in Plovdiv are °C, while nighttime lows are °C. Wrap up your sightseeing on the 12th (Mon) to allow time to drive to Bachkovo.
more less
Find places to stay Aug 11 — 12:
Hotels on TripAdvisor
Homes on Airbnb
Highlights from your plan

Traveling by car from Plovdiv to Bachkovo takes an hour. Alternatively, you can take a bus. In August, daytime highs in Bachkovo are °C, while nighttime lows are °C. On the 12th (Mon), you'll travel to Chepelare.
more less

Things to do in Bachkovo

Chepelare is the principal town in Chepelare Municipality, part of Smolyan Province in Southern Bulgaria. Get ready for a full day of sightseeing on the 13th (Tue): get great views at Orlovo Oko - Eagle's Eye viewpoint.

To see where to stay, more things to do, maps, and other tourist information, refer to the Chepelare tour planner.

You can drive from Bachkovo to Chepelare in an hour. On the 13th (Tue), wrap the sightseeing up by early afternoon so you can travel to Shiroka Laka.
more less
Find places to stay Aug 12 — 13:
Hotels on TripAdvisor
Homes on Airbnb

Shiroka Laka is a village in the very south of Bulgaria, located in Smolyan municipality, Smolyan Province. On the 13th (Tue), admire the striking features of authentic Rhodopean architecture.

For where to stay, photos, other places to visit, and other tourist information, you can read our Shiroka Laka trip planner.

Drive from Chepelare to Shiroka Laka in an hour. Wrap up your sightseeing on the 13th (Tue) early enough to travel to Pamporovo.
more less
Find places to stay Aug 13 — 14:
Hotels on TripAdvisor
Homes on Airbnb

Pamporovo is just a stone's throw from Shiroka Laka. You'll set off for Trigrad on the 13th (Tue).
more less

Things to do in Pamporovo

You can plan Trigrad trip in no time by asking Inspirock to help create your itinerary.

You can drive from Pamporovo to Trigrad in 1.5 hours. You'll set off for Sandanski on the 14th (Wed).
more less

Things to do in Trigrad

©
Sandanski is a town and a recreation centre in south-western Bulgaria, part of Blagoevgrad Province. You've now added Rafting BG to your itinerary. On the 14th (Wed), relax and float downstream with Rafting BG and then explore the striking landscape at The Melnik Pyramids. Here are some ideas for day two: steep yourself in history at Rila Monastery and then get outside with Stob's Pyramids.

Traveling by car from Trigrad to Sandanski takes 3.5 hours. Finish up your sightseeing early on the 15th (Thu) so you can go by car to Blagoevgrad.
more less

Things to do in Sandanski 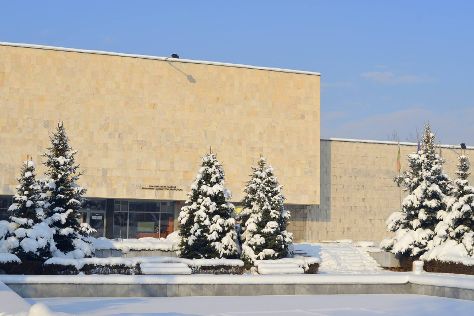 ©
Blagòevgrad is а city in southwestern Bulgaria, the administrative centre of Blagoevgrad Municipality and of Blagoevgrad Province, with a population of 70,881 inhabitants. Kick off your visit on the 16th (Fri): view the masterpieces at Vladimir Dimitrov Art Gallery and then appreciate the extensive heritage of Varosha Ethnographic Complex. Get ready for a full day of sightseeing on the next day: walk around Park Rila.

For traveler tips, where to stay, photos, and more tourist information, refer to the Blagoevgrad trip itinerary planner.

You can drive from Sandanski to Blagoevgrad in 1.5 hours. In August, daily temperatures in Blagoevgrad can reach °C, while at night they dip to °C. Finish your sightseeing early on the 17th (Sat) so you can travel to Koprivshtitsa.
more less

Things to do in Blagoevgrad

Koprivshtitsa is a historic town in the Koprivshtitsa Municipality in Sofia Province, central Bulgaria, lying on the Topolnitsa River among the Sredna Gora mountains. To find photos, ratings, maps, and tourist information, use the Koprivshtitsa driving holiday planner.

Drive from Blagoevgrad to Koprivshtitsa in 3 hours. On the 18th (Sun), you're off to Kazanlak.
more less

Things to do in Koprivshtitsa

©
Museum of Roses has been added to your itinerary. Kick off your visit on the 18th (Sun): look for all kinds of wild species at Valley of Roses and then see the interesting displays at Museum of Roses.

To see maps, more things to do, where to stay, and more tourist information, read our Kazanlak trip itinerary builder app.

Traveling by car from Koprivshtitsa to Kazanlak takes 2 hours. In August in Kazanlak, expect temperatures between °C during the day and °C at night. Finish your sightseeing early on the 19th (Mon) so you can drive to Veliko Tarnovo.
more less

Things to do in Kazanlak

Valley of Roses
Find places to stay Aug 18 — 19:
Hotels on TripAdvisor
Homes on Airbnb
Highlights from your plan

©
Veliko Tarnovo is a city in north central Bulgaria and the administrative centre of Veliko Tarnovo Province.Often referred to as the "City of the Tsars", Veliko Tarnovo is located on the Yantra River and is famously known as the historical capital of the Second Bulgarian Empire, attracting many tourists with its unique architecture. Kick off your visit on the 19th (Mon): admire the sheer force of Krushunskiye Waterfalls and then explore the fascinating underground world of Bacho Kiro.

For where to stay, photos, and tourist information, use the Veliko Tarnovo trip maker website.

Drive from Kazanlak to Veliko Tarnovo in 1.5 hours. Alternatively, you can take a bus; or take a train. In August, plan for daily highs up to °C, and evening lows to °C. Wrap up your sightseeing on the 20th (Tue) early enough to drive to Sofia.
more less

For other places to visit, ratings, where to stay, and more tourist information, read Sofia trip itinerary builder app.

You can drive from Veliko Tarnovo to Sofia in 3 hours. Alternatively, you can take a shuttle; or take a bus. You will leave for home on the 21st (Wed).
more less