©
Mestre is the centre and the most populated urban area of the mainland of Venice, part of the territory of the Metropolitan City of Venice, in Veneto, northern Italy.Administratively speaking, Mestre forms (together with the nearby urban area of Carpenedo) the Municipalità di Mestre-Carpenedo, one of the six boroughs of the commune (Comune) of Venice. Start off your visit on the 19th (Sat): appreciate the extensive heritage of I Molini di Dolo, pause for some serene contemplation at Saint Maria of Servi, and then explore the landscape on two wheels at La Strada Ciclabile Treviso-Ostiglia. Here are some ideas for day two: take in the architecture and atmosphere at Chiesa di San Gaetano and then play a few rounds at Golf Club della Montecchia.

To find where to stay, traveler tips, photos, and other tourist information, refer to the Mestre tour planner.

If you are flying in from Romania, the closest major airports are Venice Marco Polo Airport, Treviso-Sant'Angelo Airport and Trieste–Friuli Venezia Giulia Airport. August in Mestre sees daily highs of 33°C and lows of 22°C at night. Wrap up your sightseeing on the 20th (Sun) to allow time to travel to Venice.
more less

Things to do in Mestre 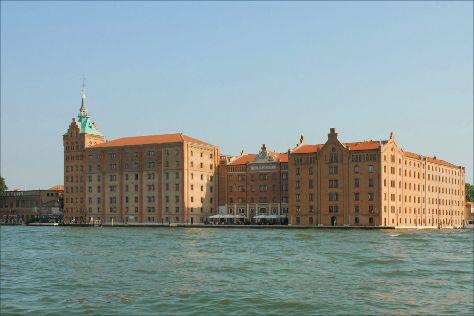 Start off your visit on the 21st (Mon): step off the mainland to explore La Giudecca, then stroll through Bagni Alberoni, and then take in the spiritual surroundings of Campo del Ghetto.

For where to stay, ratings, more things to do, and tourist information, go to the Venice custom trip planner.

Venice is very close to Mestre. In August, plan for daily highs up to 35°C, and evening lows to 22°C. Finish up your sightseeing early on the 21st (Mon) so you can travel to Eraclea Mare.
more less

©
Kick off your visit on the 22nd (Tue): savor the flavors at Jolly Market Di Longhetto Daniela, then kick back and relax at Onda Azzurra, and then make a trip to Ponte Romano.

For where to stay, photos, reviews, and other tourist information, use the Eraclea Mare travel planner.

Traveling by car from Venice to Eraclea Mare takes an hour. August in Eraclea Mare sees daily highs of 33°C and lows of 22°C at night. Finish your sightseeing early on the 22nd (Tue) to allow enough time to travel to Valdobbiadene.
more less

Things to do in Eraclea Mare

©
Valdobbiadene is a town in the province of Treviso, Veneto, Italy. On the 23rd (Wed), learn about winemaking at Ca'Salina Soc, Agricola ss and then trek along Cadini del Brenton. Get ready for a full day of sightseeing on the next day: sample the fine beverages at Poli Distillerie, then don't miss a visit to Piazza Garibaldi, then stroll the grounds of Tomba Brion di Carlo Scarpa, and finally take in the architecture and atmosphere at Basilica Santuario dei Ss. Vittore e Corona.

For where to stay, photos, reviews, and other tourist information, use the Valdobbiadene trip itinerary maker.

You can drive from Eraclea Mare to Valdobbiadene in 1.5 hours. In August, daily temperatures in Valdobbiadene can reach 35°C, while at night they dip to 22°C. Finish your sightseeing early on the 24th (Thu) to allow enough time to travel to Sirmione.
more less

Things to do in Valdobbiadene

©
Sirmione is a comune in the province of Brescia, in Lombardy (northern Italy). On the 25th (Fri), learn about winemaking at Villa Calicantus and then explore the historical opulence of Il Santuario di Montecastello. Get ready for a full day of sightseeing on the 26th (Sat): tour the pleasant surroundings at Spiaggia Comunale di Santa Maria di Lugana, pause for some serene contemplation at Chiesetta di S. Anna, and then pause for some serene contemplation at Chiesa di San Pietro in Mavino.

To find more things to do, photos, reviews, and other tourist information, go to the Sirmione vacation planner.

Traveling by car from Valdobbiadene to Sirmione takes 2.5 hours. Expect a daytime high around 35°C in August, and nighttime lows around 22°C. Cap off your sightseeing on the 26th (Sat) early enough to go by car to Verona.
more less

Things to do in Sirmione

City of Romeo and Juliet

Start off your visit on the 27th (Sun): pause for some serene contemplation at chiesa di San Lorenzo - Verona, then explore the world behind art at AMO - Arena Museo Opera, and then delve into the distant past at Porta dei Borsari.

For more things to do, other places to visit, reviews, and more tourist information, read our Verona trip builder.

Drive from Sirmione to Verona in an hour. Alternatively, you can take a bus; or do a combination of bus and train. In August, plan for daily highs up to 35°C, and evening lows to 21°C. Wrap up your sightseeing on the 27th (Sun) early enough to drive to Bibione.
more less

Things to do in Verona

©
Kick off your visit on the 28th (Mon): zoom along the surf with a waterskiing or jet-skiing adventure, contemplate in the serene atmosphere at Chiesa di Santa Maria del Mare, and then enjoy the sand and surf at La spiaggia di Pluto.

Drive from Verona to Bibione in 2.5 hours. Alternatively, you can do a combination of train and bus; or take a bus. Expect a daytime high around 34°C in August, and nighttime lows around 20°C. Wrap up your sightseeing on the 28th (Mon) to allow time to travel back home.
more less

Things to do in Bibione